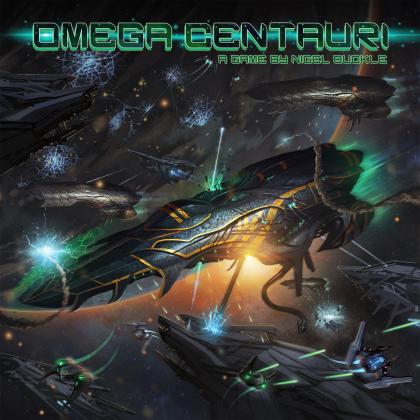 Two millennia ago, a loose federation of planets combined to form the Galactic Empire. From that small beginning, the Empire ruthlessly expanded, enslaving or exiling all races that were a threat to their dominion. Recently, the Empire has suffered revolts from conquered races, and on the barren galactic rim, the exiled races gather their forces to strike at the weakened Empire. As the Empire's might and influence wane, a new era is dawning. Which new race will ascend to power?

Omega Centauri is a game of galactic empire building for 2 to 4 players. The play map is made up of sector tiles, and at the beginning of the game the majority of the map is Empire-controlled resource sectors. A variety of map layouts are included and the size of the map depends on the number of players. During each round of play, you have the opportunity to perform three of five possible actions:

Assemble (place your fleets into sectors with shipyards)
Build (build monuments, construct shipyards, and erect planetary defenses)
Move (move fleets into a sector or out of a sector)
Politics (gain resources or increase your fleet capacity)
Research (select an available technology)

In the base game, players take turns each round selecting and executing one action at a time until each player has taken three actions, then a new round begins. The base game offers a compelling mix of strategic planning and tactical play, as players must balance their long term goals for development and for technology acquisition with the need to take advantage of the opportunities that arise during action selection. The base game provides a streamlined 4x experience that can be completed in about an hour.

The advanced game differs from the base game in several important respects. First, the advanced game introduces improved technologies, racial powers, and other elements to provide a more complex and flavorful gaming experience. It also requires players to select all three of their actions (and the order that they will be performed in) at the start of every round. Thus, to succeed, you must carefully plan your turn, anticipate your opponents' actions, and more successfully execute your overall strategy. Reserve Fleet Actions are added, giving an important boost and a use for spare fleets, through these (and spending valuable resources) players can take an extra action. Finally, through the Politics Action, the full game allows players to select goals that award victory points at the end of the game based upon how well the player has carried out a specific agenda. The full game provides an epic 4x experience in around two hours with variable powers, advanced technologies, and numerous paths to victory.

Throughout the game, you will be compelled to make important decisions regarding how to advance your civilization: Will you focus on obtaining technological or cultural superiority, or will you build an invincible armada to crush those who stand in your way? The winner of the game will be the player who has accumulated the most victory points at the end of the final round of play. Omega Centauri offers players many routes to victory, and you can accumulate victory points (VPs) by wresting control of sectors of space from the Empire (or from other players), by improving your infrastructure and planetary defenses, or by expanding your cultural influence. The player with the most VPs at the end of the final round is deemed to have ascended and established the new dominant Empire in the galaxy.