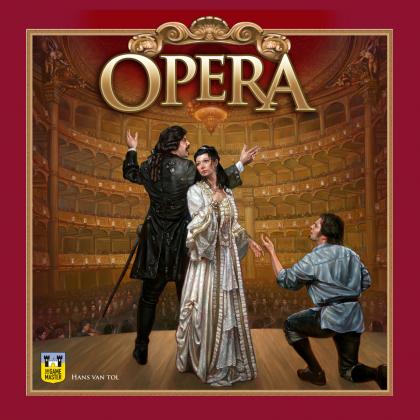 In 1607 Monteverdi’s Opera La Favola d’Orfeo had its worldwide premiere. Over the following centuries, Europe was taken over. In the board game Opera, the players bring Opera to the public. In Venice, Vienna, Berlin, London, Paris and Milan great Opera houses arise. Opera leads the players through the periods of Baroque, Classicism and Romanticism. The epic music of six famous composers Händel, Monteverdi, Mozart, Beethoven, Wagner and Verdi will bring the public to their Opera houses.

Clever budgeting is essential to gain control and be the master of your own success. Each round the players determine their budget level to influence the order of play and to activate the characters in the game. The players build new Opera Houses, scout for new Operas of popular composers and try to earn some money. Sometimes they choose to cash in at the Palazzo where the Signora pays them well, but in the long term music are one of the key fundamentals to build your empire. The elegant Maestro brings the performance of an Opera to a higher level and the Critico can make or break a composer. Do not overvalue the three counting rounds with progressively growing value, because a well timed appearance of the Esperto might just bring you the victory in Opera. Ducats and capacity are key elements to facilitate the growth of your empire and influence, but in the end wealth is just an instrument to attain higher ends.

In Opera the players must plan well. Introducing an Intermezzo from time to time might be helpful to seize the initiative on a decisive moment in the game. Opera takes place over 9 rounds of play, divided in 3 episodes. Each episode consists of three playing rounds and a counting round. The player with the highest number of victory points after the third and last counting round will be the victor.

Opera has been succesfully launched on October 21st, 2009. Complete rules are available in the English, Dutch and German language. Also a FAQ and an introductionary video to understand the basic rules of Opera can be found at http://www.thegamemaster.nl/en/games-opera.htm.