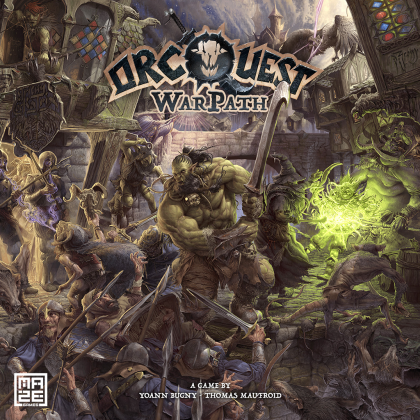 OrcQuest Warpath is a cooperative game for 1-6 Players (playing 2-6 Heroes) in which you take the role of green skins who embark together on an adventure to avoid the potential annihilation of their race. Together, they will use their teamwork and unique skills to overcome the enemy and hopefully find the source of all evil.&#10;&#10;Throughout the adventure, you can develop your weapons, and working together as a team, you will pay homage to the Badass God by leaving a trail of blood and bones everywhere you go!&#10;&#10;Ten scenarios on double-sided modular tiles that will test your stealth, your teamwork and your Orc skills against the human scum and maybe&hellip; other surprise guests!&#10;&#10;Players follow a campaign where the objective is to find out what motivates the expansion of the human lands. Players will go through different quests (saving allies, fighting big bosses...) and will develop themselves as well as their equipment as the campaign advances.&#10;In order to reach the end they must use their team spirit as well as their stealth skills to go through the different scenarios.&#10;Players win by reaching the last chapter and defeating a &quot;still secret&quot; opponent.&#10;Players lose if the Alert Level reaches the maximum allowed or if all heroes die.&#10;&#10;&mdash;description from the publisher&#10;&#10;