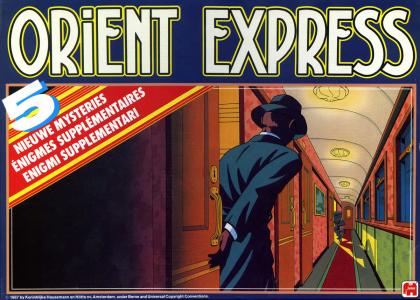 This expansion to the Jumbo edition of the "Orient Express" base game offers 5 new atmospheric cases to solve, all written by Ben Leijten, who was also the man behind the cases for the Jumbo base set:

Publishing History: "Orient Express" first appeared in the USA in 1985, published by Just Games and was quickly picked up by Jumbo NL which released a reworked version for the European market one year later. The main difference between the two editions is that the European interpretation is much more co-operative as a lot of the information is shared by all, making it a more open, but somehow also a faster and more atmospheric experience for all involved.

Since there were only 10 solvable cases that came with the base game, it was inevitable that additional cases had to be published to keep its players' base entertained. Both publishers happily obliged, each releasing their own additional sets. Jumbo only released 5 extra cases that appeared in Dutch, French, Italian and German, meaning that not all of their European language editions saw additional cases beyond the initial 10. And like before, the murders are pretty tough cases to crack, as even with all the available information revealed, some educated guesses willstill have to be made by the competing sleuths.