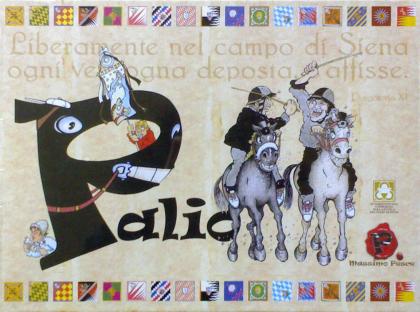 The Palio di Siena (known in Italy as Il Palio) is a crazy horse race that takes place twice a year in Siena on July 2 and August 16.

Ten of the 17 Contrade (or city wards) are represented in the race: the seven that were left out of the previous race and a randomly chosen three from the remaining ten Contrade. Each Contrade has particular colors and coats of arms, and the horse and rider are dressed to embody their Contrade. Riders can use their whips on other horses and riders as well as on their own mount, and the winner is the first horse to cross the finish line with its head ornaments in place – whether or not the rider is still on the horse.

New Italian game designer Massimo Pesce, together with the help of Scribabs’ Paolo Vallerga as art director, has produced a nice and simple game about this race. The players control the seventeen Contrade involved in the two races, with ten Contrade taking part in the first race (Palio di Provenzano) and a different set of ten in the second one (Palio dell’Assunta). This set-up means that one or more players might hold Contrade involved with only one race.

Each Contrade is assigned a horse ("la tratta") that can be either a good one ("bono," with a movement die of 3, 4, 4, 5, 5, 6) or a not-so-good one ("brenna," with movement of 3, 3, 4, 4, 5, 6). Since the race lasts for three laps, that small difference can add up over time. In addition to the decorative jockey, players receive nine cards that can be used during the race to create small advantages or slow down opponents.

As for the race itself, like the real Palio, the beginning is somewhat chaotic as horses and riders jockey for position. During the movement phase, if a horse can’t move its entire distance, it risks falling or perhaps just throwing the rider, which doesn’t prevent a horse from winning. The game is all about playing the right cards at the right moment and getting the right rolls.

Palio is simple and quick, the materials are good, and the graphics is great !