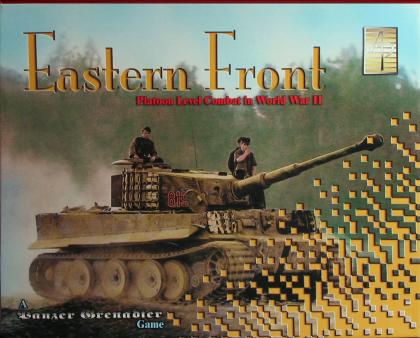 "Eastern Front" is a reprint of the original "Panzer Grenadier" game by Avalanche Press. However, it's much more than just a reprint, with the game expanded noticeably and a new revision of the rules, taking lessons learned throughout the series. Art has also seen a major update, along with a number of other improvements:

The new maps will use the style Terry Moore Strickland showed so well with Beyond Normandy.

There’s twice as much playing area from which to choose, as there has been a move from four to eight maps

In addition to infantry, the Germans also now have two full squadrons of cavalry.

A new concept is added for the first time to the series, the vehicles known as prime movers. These are tracked or semi-tracked vehicles like the Soviet Komsomolets or the German SdKfz-7. They have better performance off the road than the game’s standard trucks, but cannot carry infantry.

The Soviets received a much greater overhaul than the Germans. New artillery pieces include the 107 mm cannon and 76.2 mm mountain gun. A new “mixed” type of infantry is available, anti-tank rifle platoons. There are two new flavors of armored car: the FAI and Ba6 in addition to the Ba10m found in the first edition. The stable of tanks is vast.

The Romanian army is now represented

All 50 scenarios from the original Panzer Grenadier have been included, as well as 62 new scenarios, for a total of 112.

This game is part of the Panzer Grenadier series