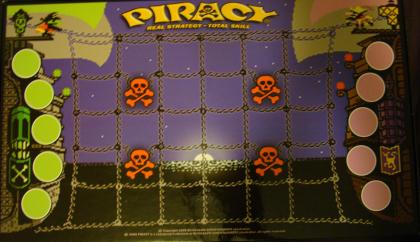 "Piracy was first released in 1985 on the Commodore C64 computer. It travelled the world, and now this enigmatic puzzle of a strategy game is back, testing its players on a new board game format.

After this history lesson from the box, a little about the game itself is in order.

Piracy is a two player abstract game with a pirate theme.

The board is composed of two ships, one Spanish and one pirate, between the two is a rope net consisting of six by five spaces. The rope net also has 4 broken rope spaces which will drop a player's piece to the sea (out of game) if they land on it.

Players have two options a turn, they may either launch as many as up to 5 game pieces from their ship's cannon doors towards the enemy. Or, move all their pieces on the net forward one space, either forward or diagonally up/down. Player pieces that land on the opponent's pieces remove the enemy pieces from the game.

If a player's pieces reach the other ship, they will destroy the opponent's cannon door and any pieces behind it. The player's piece is also returned to the player's ship to again enter the net.

The optimal game end is when one player removes all the other player's pieces from the board.

An added complication is that pieces moving up or down off the net return on the opposite top or bottom, depending on movement.