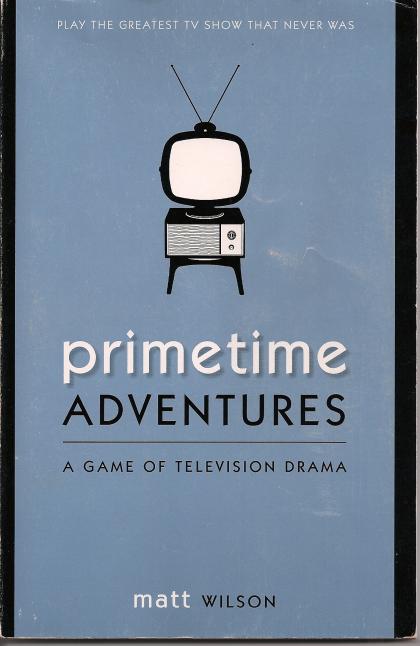 If you enjoy great TV, then you'll love Primetime Adventures, the game that lets you create and play the TV show you always wanted to see, complete with meaningful characters and gripping drama. You and the other players will create the show and its cast, then play out actual episodes of the series, exploring the personal struggles of the main characters and cooperatively laying out the kind of story television executives dream of.

Changes from the 1st edition (from the publisher's website):

- The producer’s budget is now calculated differently. You sum up the screen presence of all protagonists, double that number, and add three. In other words: 2x(screen presence)+3.

- Conflicts are now resolved via cards. Instead of odds, count red cards, and use hearts as trump if you have a tie. If there’s still a tie, look for the highest heart.

- Aside from the rules changes, there’s a lot of little stuff here and there. I added a couple new sample shows, revised some text, and added a ton of examples in the text. There’s also a few new pieces of very cool artwork.