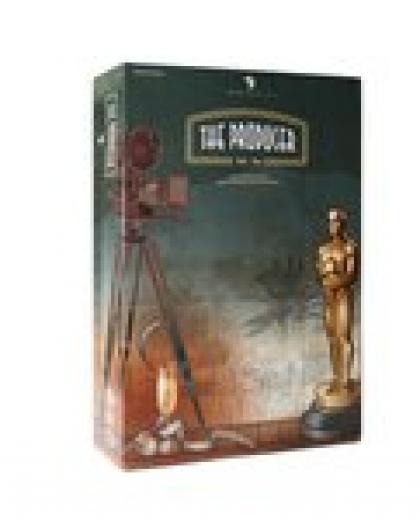 Imagine living during America's Depression. You live dreaming the life of a film star &mdash; until a telegram announces an unexpected inheritance: two million dollars and the property of a shed on the outskirts of Los Angeles. Will you turn this barren land into the studio of a major film producer &mdash; or squander your fortune fading in the golden dust of the California desert like so many others before you?<br/><br/>The Producer: 1940-1944 is a board game inspired by the great Hollywood movies. The aim of the game is to score more points by winning awards for actors and film directing, building the structures of their studio, or producing more films of different genres. The player must decide which strategy to follow early in the game based on the script and cast with which depart.<br/><br/>The game consists of three or five rounds corresponding to three years. Every year, each player will fish and play in turns six cards event that will simulate the intervention of professionals to improve their own films or sabotage others', or the occurrence of historical facts, such as Pearl Harbor, the invention of the computer, the skirmishes between the Mafia and the FBI. For each card played you will place its own &quot;Producer&quot; (worker) to activate areas on your dashboard (the studios) or different locations on the main scoreboard that represent Hollywood.<br/><br/>You can buy scripts, engage the biggest movie star of the time, young players with a great future and legendary directors. At the time of producing each film, it will extract from a pool of tokens representing the potential audience for that year and the choice of which films produce must be made according to specific strategies to meet the latent demand.<br/><br/>If the production of the film will procure players the money to expand own activities, the award ceremony at the end of each year will give them the necessary points for the win, making the economic aspect important but not relevant to the final score.<br/><br/>At the end of the third year in the base game (or in the case of the fifth game to experts), it will award bonuses and the Reckoning will be to determine the winner.<br/><br/>Every aspect of the game: dynamic production, events, characters, scripts, have been played so historical in order to give movie fans a reproduction as faithful as possible of Hollywood of the 1940s. Every script and character shows in addition to game information, rumors, gossip and curiosity that will delight even the players less competitive.<br/><br/>