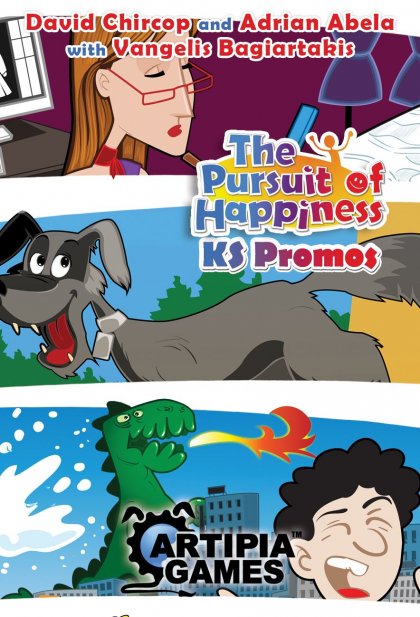 The Pursuit of Happiness: KS Promos

A bundle of mini-expansions that were available during the Kickstarter for The Pursuit of Happiness.&#10;&#10;The Events mini-expansion adds special events that are drawn at random at the beginning of every adult round and come into effect at the beginning at the next round (4 in total).&#10;&#10;The deck contains both positive and negative events and the player is able ensure that they get the positive effect of a card or prevent that they get a negative one by performing the task on the card during the round as it is not activated till the beginning of the following round.&#10;&#10;Events include such positive events as &quot;Technological Breakthrough&quot; that allow you pay less resources for Projects, negative events such as &quot;Financial Crisis&quot; that make Projects more expensive and even &quot;Natural Disaster&quot; that cannot be prevented and causes a loss of Short Term Happiness.&#10;&#10;The Trends mini-expansion adds special trends that are drawn at the beginning of the game and effects play throughout.&#10;&#10;Three are drawn at random and illustrate which categories will be popular through the players lifetime.&#10;&#10;At the end of the game the players will gain additional Long Time Happiness by having completed projects in these categories.&#10;&#10;The Pets mini-expansion adds pets to the Item-Activity cards.&#10;&#10;Pets are different in that you do not have to use card actions to advance them - they do this by themselves during upkeep as long as you feed them (pay the upkeep cost).&#10;&#10;The Stand-Alone Jobs mini-expansion consists of 3 new jobs that are shuffled in with the standard job cards.&#10;&#10;The difference between standard and stand-alone jobs are that with a stand-alone jobs you can not be promoted. Instead you can choose to work harder. This is done by paying up to two times the cost in the Work Harder section and thereby getting the same times the reward. This applies to the upkeep phase as well.&#10;&#10;