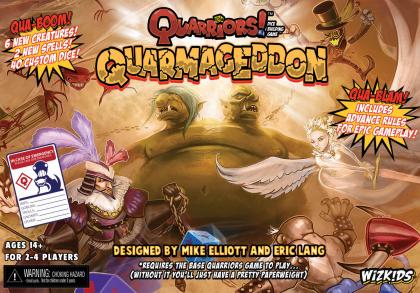 Qua-Boom! After an epic battle between Quaxos and the Three-Eyed Dragon of the Quarmageddon, the Quarmageddon is released upon us! Quarriors! Quarmageddon, the second expansion set to the Quarriors! dice-building game, adds forty new custom dice powering six new Creatures and two new Spells for you to bring a serious smack-down to the battlefield of hexahedron monster combat. Some battle-hardened Creatures come equipped with a new "Immunity" ability so they can laugh off whatever your opponents throw at you! No guts, no Glory!

This expansion set features an updated Quarriors! rulebook and a box that stores the expansion and base set.