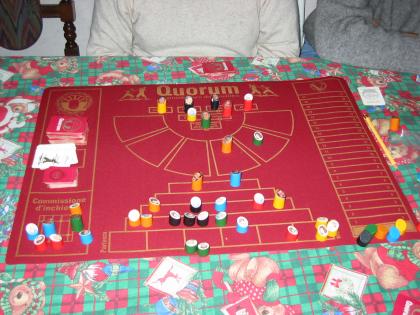 Quorum is a humorous game about the formation of government in Italy. The map depicts the Italian Parliament and the stairs in front of the palace. Every player has two Leader pawn (with the faces of real Italian politicians from the '90s) and 4 Peones pawns. Every turn he can move two of them: Leaders move of two steps, Peones of one. A system of Attack, Defense and Special cards, everyone with a humorous comment, are used for bonus movements, stops, putting pawns under investigation and/or in prison, and so on.
When 7 pawns reach the inside of the Parliament, they can share the 7 Minister seats, that have a different point value. Each pawn counts for one vote. But if players do not agree, the game goes on so more pawn will enter and both the number of votes and candidates will vary. If 13 pawns reach the Parliament, a special procedure to ensure a government is adopted.
The score is partially open and partially secret, so not to show openly who is going to win and leave the game of alliance and bargains open. The first one to reach 51 points (usually after 2 or 3 governments) is the winner.
Since Italian election system changed abruptly just after 1993, the authors developed optional rules for the "Sistema maggioritario".