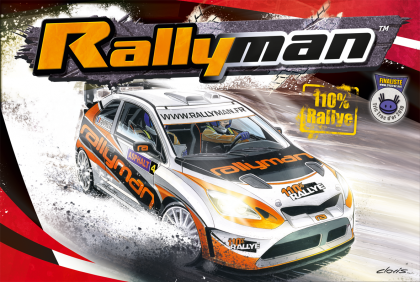 In the racing game Rallyman, before you can start the race, you need to create your rally track by connecting the sides of 1-4 double-sided boards, with one side of each board featuring asphalt and the other side snow.

The movement system is simple: Each die rolled, you advance one space. So you have five dice for each of the speeds and two of "gas" to continue moving without changing your speed. Each die is playable exactly once each turn. When you stop your movement, you take a card corresponding to the last speed that you started: the higher your speed, the lower your time.

The track has both straight sections and turns that require a certain speed so that you can pass with different manners (by skidding, sharp turning, ...). You must roll the die because it determines the speed selected, but may show a "!" which will put you in danger. With the third "!" displayed, your car will risk going spinning off the road, resulting in loss of time (1'00" instead of the scheduled time on your card), but sometimes also damage to the vehicle depending on the landscape in which you crash.

At the end of each round, each player adds his times to his total time. The winner is the player who accumulates the least total time.

The ability to take risks to scrape off a few seconds or in the management of your tires adds more to the simulation.