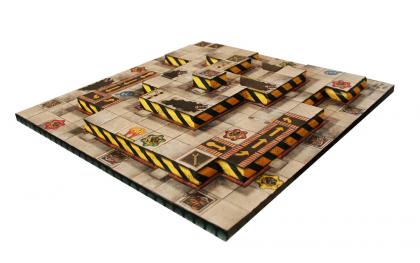 RoboRally: King of the Hill

The finalists of the RoboRally tournament which transpired at the Origins Game Fair in 1999 each received a copy of the King of the Hill board. While it is virtually impossible to obtain an original, the fan community has produced an accurate print-and-play version available for download.

King of the Hill incorporates various elements from previous expansions published by Wizards of the Coast—most notably being one of only three boards to utilize ramps and ledges—while exclusively featuring the 'steep ramp' element which, unlike normal ramps, requires three movements worth of momentum in order to ascend.