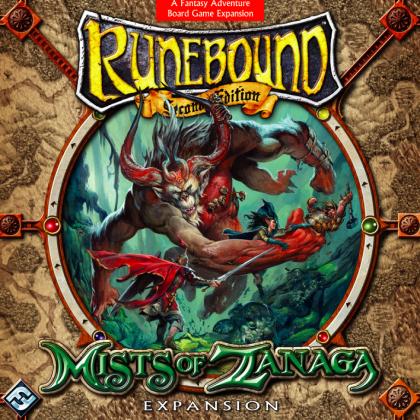 Fantasy Flight Games is excited to present the newest Runebound expansion, Mists of Zanaga! This summer, journey to a new and mysterious land. Explore the jungles and ruins of an ancient and forgotten civilization. Face the terrifying power of the primal gods. And be the first to restore balance to Zanaga...

Mists of Zanaga adds a colorful new board overlay, depicting the wild jungles and swamps of Zanaga. Six brand new heroes will be able to explore this new continent, uncovering the secrets of the makhim’s rituals, encounter wandering monsters, and hunt for the elusive Lost City. Adding all-new gameplay mechanics, a variety of primal gods to face, and over 165 new cards to bring this lush landscape to life, Mists of Zanaga creates a totally new way to play Runebound. Search out the secrets of the primal gods’ power and help summon them to free Zanaga from the clutch of Tarakhe.