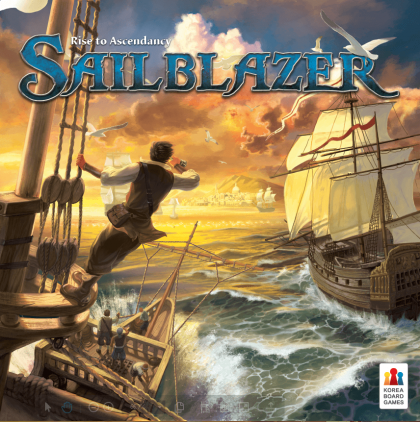 Raise your anchors and blaze your sails! Thwart rivals and vanquish pirates! Carve out favorable trade routes and lade your ship with fantastic wealth! Only one captain will rise to ascendancy and claim the designation of Sailblazer!&#10;&#10;Each player in Sailblazer is the captain of the vessel laid in front of them. All players start the game on Saffron Island and may sail in any direction from there. Progress through the game is denoted by three progress stages. Each progress stage brings with it new explorations, more valuable resources, and more formidable pirates. The experience and wealth accumulated throughout the game is represented by prestige points. At the end of the game, the player with the most prestige points wins.&#10;&#10;In more detail, each player's turn consists of two phases. At the end of these two phases, the next player to the left begins their turn. These two phases are:&#10;&#10;1) Movement Phase, during which players can choose to explore, sail, or drop anchor.&#10;&#10;2) Action Phase &mdash; If there is no pirate ship on the player's tile, the player can take one of the following actions from their current ocean tile location: explore, sell and buy trading goods, resupply, work at port, or fish.&#10;&#10;The game's ending is initiated when one of the final achievement ocean tiles is revealed in the final stage.&#10;&#10;&mdash;description from publisher&#10;&#10;