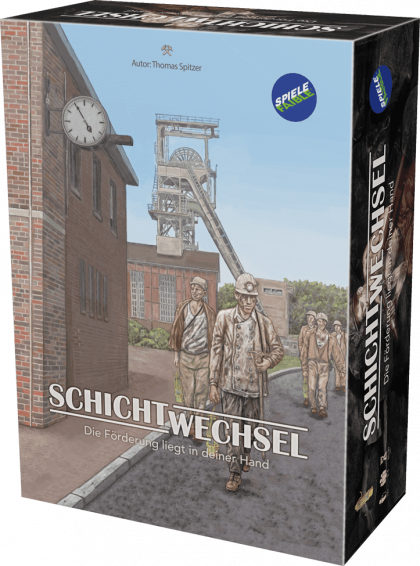 Over the past centuries, the Ruhr region in Germany has been shaped and dominated by coal mining. At the end of 2018, the last coal mine in Bottrop closed its doors, bringing to an end an era in the Ruhr region that is second to none.&#10;&#10;The game Schichtwechsel takes up this theme and shows simplified typical areas around the coal mining in the Ruhr area of the 1950s. As a player and administrator of a coal mine, you experience an exciting competition and live through a piece of Ruhr Valley history. You bring coal and overburden from underground to the surface, let your miner go through a &quot;shift at the colliery&quot;, produce coke, or build the typical colliery settlements.&#10;&#10;A game of Schichtwechsel takes place over five rounds, and each round consists of three phases: The preparation phase in which, among other things, the amount of mined coal is determined; the action phase in which players use their action pieces wisely in turn; and a small end-of-round evaluation. After the fifth round is a final scoring. Schichtwechsel offers you many possibilities to get the best out of your coal mine in order to score as many victory points as possible at the end.&#10;&#10;This game is the revised and improved version of the game Die lettze Zeche, which was created between June 2017 and March 2018 as a contribution of the games group Fair-Spielt of the Spielezentrum Herne to the funding project &quot;GL&Uuml;CK AUF JUGEND&quot;. The RAG Foundation's sponsorship project honors the achievements of coal mining on the occasion of the coal phase-out and the closure of the last mines at the end of 2018.&#10;&#10;&mdash;description from the publisher&#10;&#10;