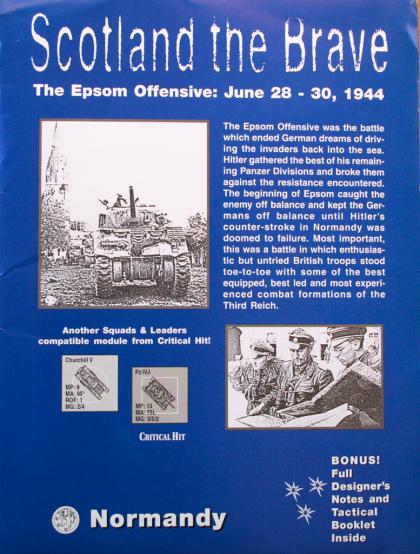 (from the back sleeve:)

SCOTLAND THE BRAVE tells the story of the BatUe 01 Epsom. Some histories pass over this battle as merely the second of Montgomery's failed attempts to capture the key city of Caen. Increasingly. however historians are • recognizing the true meaning of the Epsom Offensive. This was the battle which ended German dreams of driving the invaders back Into the sea. Hitler gathered the best of his remaining Panzer Divisions and broke them against the resistance encountered. The beginning of Epsom caught the enemy off balance and kept the Germans off balance until Hitler's counter-stroke in Normandy was doomed to failure. Most important, this was a battle in which enthusiastic but untried British troops stood toe-to-toe with some of the best equipped. best led and most experienced combat formations of the Third Reich. The Battle of Epsom was to set a pattern that was to continue for the rest of the campaign in Northwest Europe, from Normandy to the Baltic: the grinding-down of Hitler's elite troops by dominance in the air and by excellence of artillery support.

SCOTLAND THE BRAVE includes a well-researched historical game map of the battlefield, special rules, nine new scenarios and a Platoon leader 2.1 campaign game. You will also receive a comprehensive scenario tactics and designer's notes booklet. Everything is included to play using your existing ASLRB and game pieces.

Ownership of the ASLRB, BV and WoA are necessary to play this game.