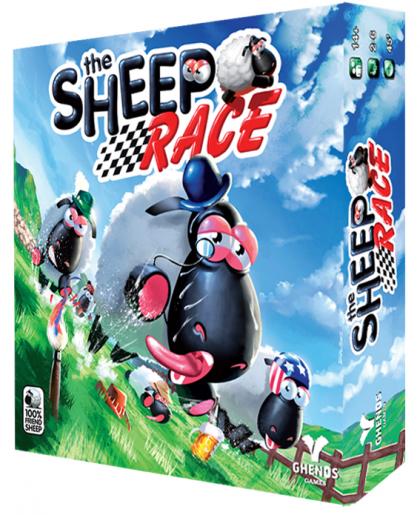 Here is the tale of "The Sheep Race", of that glorious day when her Majesty the Queen of England's sheep were challenged by those of the former colonies in order to decide which of them were the best in the world. New Zealand and Australia were the first to issue the challenge, but soon after Scotland, South Africa, and the United States joined in. Then Spain, France, Germany, Italy, Greece, and even Brazil intervened. England proudly refused to be forced into this dispute and proposed a worldwide racing championship be held in the Suffolk countryside in order to establish who were the world's supreme sheep farmers. Thus, the sheep race became an incredible and fascinating reality...

In The Sheep Race, players must place bets on three races, with six sheep participating in each race. Each sheep starts with a number of "breath" cubes (in three colors) on it, along with numbers for three speeds of movement: trot, walk, and gallop.

On a player's turn, he rolls the two dice – one a normal d6 and the other having values 0-0-0-1-2-3 – then moves the sheep in the appropriate lane, with a 7 or 8 moving the sheep in the outer two lanes and a 9 moving the lazy sheep at the back of the pack. When you move a sheep, you choose one of the three types of movement, advance the sheep the indicated number of spaces, and remove the appropriate breath cubes required – or you make the sheep rest so that it recovers two blue breath cubes.

If a sheep hits the "end zone" – the final five spaces of a lane – with no cubes on it, then the sheep is exhausted and can't move or rest again. The race ends when three sheep reach the finish line or when all the sheep are exhausted. The first three positions pay off for those who bet on them, even if one or more of those positions contains an exhausted sheep.

Players place three bets in the first two races (two secret and one visible) and two bets in the final race (both secret). Whoever collects the most in bets wins!

With the advanced rules, players choose which sheep to move each time and the game lasts only one race, with players betting on the final order of all the sheep. Sheep sometimes get blocked and can move again only when passed by the flock leader.