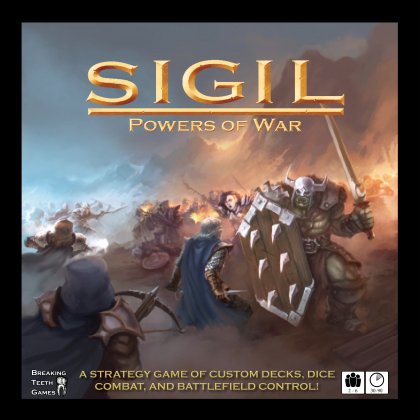 Sigil: Powers of War – Base Set

Description from the publisher:&#10;&#10;Sigil: Powers of War is an action packed fantasy based strategic battle game with 8 customizable factions. It takes all the excitement of dice combat and combines it with pre-built deck construction that allows for multiple strategies for victory. Choose your Sigil, build your army, and prepare for War!&#10;&#10;Each player start the game with a Sigil of Power related to their faction of choice, a 5 card starting hand, and a powerful Warlord who can advance your front lines by placing mana generators and pushing back the enemy. These mana generators allow units to spawn at them when summoned and also generate mana on every turn giving the player the power to cast multiple and increasingly powerful spells.&#10;&#10;The goal of the game is simple... destroy your opponents Sigil which starts with a 20 point life counter. The first person whose Sigil's life counter reaches 0 loses. This is accomplished by using your Warlord, the action cards in your hand, and multiple units who can be summoned throughout the battle. Combat is strategy based with a touch of luck based on dice combat.&#10;&#10;Gameplay is expandable up to 6 players and the base set out of the box can be played with up to 4 players. Multiple game variants and player count game options.&#10;&#10;