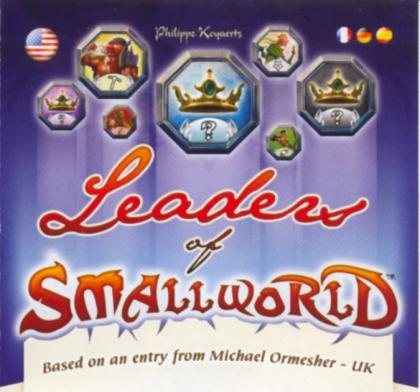 This expansion of Small World is a promotional expansion first given away at Spiel 2009 in Essen. The expansion is based on an idea of Michael Ormesher in a Days of Wonder "Race design contest".

The expansion consists of 24 leader tokens that are neither a race nor a power. When you pick a new race, you can opt to buy its leader. The leader acts as an additional race token. The leader, however, disappears as soon as the race goes into decline. Also, the leader is brave, which means that he can only be staying at regions that are not immune.

Leaders can be held hostage for ransom. If the ransom is not paid, the leader counts as two victory points at the end of the game for the player that captured the leader.

The expansion was available EXCLUSIVELY from The BGG Store but is now out of stock. However in the Small World 2 kickstarter a reprint and update of the expansion is available as a strech goal.

Update December 2013 (Days of Wonders news)
http://blog.daysofwonder.com/2013/12/12/small-world-royal-bo...
"We also reprinted a batch of the long out of print Necromancer Island and an improved version of Leaders of Small World (now including all the races from the Small World Universe, up to the Royal Bonus) for our backers. After fulfilling these Kickstarter rewards, we found ourselves with a few extra copies which we are making available to Small World fans. So while stocks last (and we mean it when we say these are limited in number), you can pick up the new Royal Bonus expansion, Necromancer Island and Leaders exclusively from the Days of Wonder website. Please, note that this offer is limited to one copy of each expansion per order."