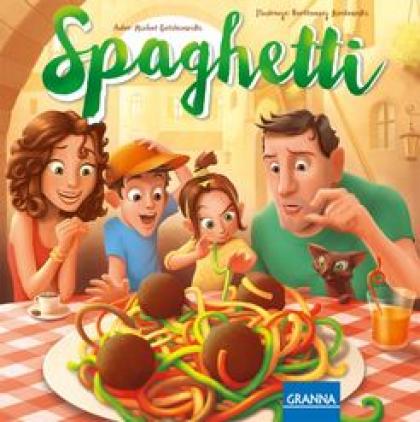 Descrizione tratta da Boardgamegeek:
Spaghetti is a dexterity game in which players compete to pull out as many valuable spaghetti noodles as possible. There are 27 noodles on the plate that vary in colors, length and points:


A player has only twenty seconds to collect the best pieces, but eating spaghetti requires great care. If anything falls off the plate and stains the table, the player's turn ends immediately. A player can use only one hand and can touch only one noodle at a time at one point. If pulling a noodle causes a meatball to start rolling off the plate, the player can drop the noodle to try to catch the meatball. At the moment the meatball is grabbed, it cannot be touching any noodles on the plate. These skillfully caught meatballs are worth one point at the end of the game.

The game ends when the plate is empty, with no pasta and no meatballs, and whoever scores the most points wins.


Spaghetti Difficili differs from the basic game in the number of meatballs (now four) and the size of plate on which spaghetti is served (players choose a small one).

In Spaghetti Superiori, players earn extra points for fulfilling Italian recipes. There are 12 recipe tokens in total, each shows spaghetti ingredients. Players must remove those ingredients to claim the token. A player must get all of a token's ingredients during a single 20-second turn.