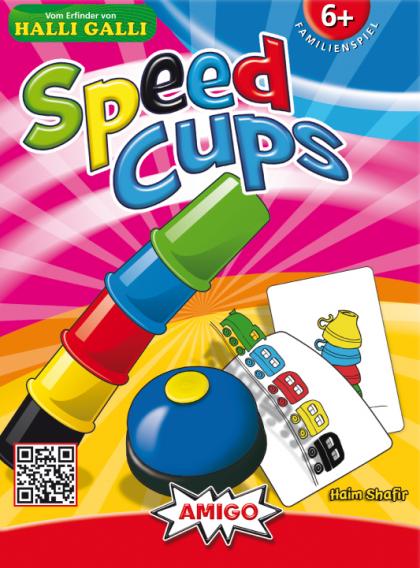 Haim Shafir's most famous game design, Halli Galli, includes one of the best-known game props in existence: a bell. Players both young and old love to hit the bell after spotting a winning combination, so it's no surprise to see the bell return in yet another Shafir design: Speed Cups.

In this game, each player receives a set of five plastic cups, each a different color; a deck of 24 cards is shuffled and placed face down in the center of the table next to the bell. One player flips over the top card, which depicts colored objects – trains, birds, cups, etc. – stacked vertically or horizontally, then everyone tries to recreate this colored sequence with her own set of cups. The first player to do slams the bell, revels in the soul-brightening "ding", then (if correct), claims the card. Someone then reveals the next card, and the players start shuffling cups once again.

Once all the cards have been claimed, whoever holds the most cards wins!