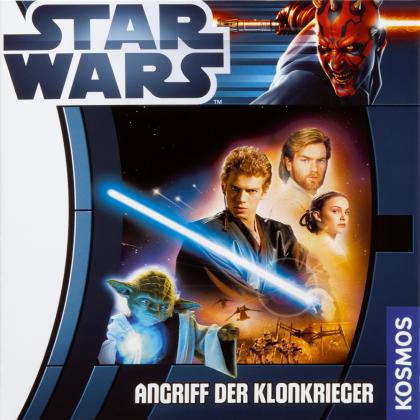 Obi-Wan Kenobi, Anakin Skywalker and Padmé Amidala have fallen into an ambush on Geonosis. Many Jedi have arrived to rescue them, including Mace Windu and Kit Fisto. But suddenly the Jedi are surrounded by an army of battle droids and super battle droids led by Count Dooku.

In Star Wars: Angriff der Klonkrieger , you'll try to use your Jedi dice to hold your position and fend off the onslaught of droids. Will you be able to hold out until Yoda arrives with the clone army?

Each player has a set of dice, and together the players must fend off special threats and new droids that are arriving every round. Every player throws a die each round and then they are allocated.

The special threats need particular dice values (for example, four threes) which can be collected over multiple rounds. Failing to counter a special threat may lead to additional droids being put on the board, or immediate defeat.

For attacking droids just the sum of the dice values is used. This is the only part of the game where the player figurines must move on the board to get into attack range.

The game ends after a fixed number of rounds, or if the players fail to counter a special threat.