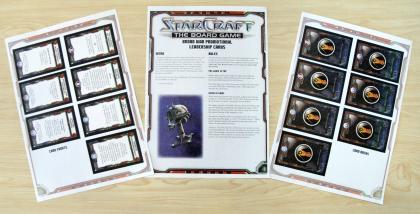 This is a downloadable expansion which adds a new Terran faction: Gerard DuGalle of the United Earth Directorate.

It contains rules and a new Leadership Deck for the United Earth Directorate. These optional cards require both StarCraft: The Board Game and its expansion StarCraft: Brood War.

Some examples of Leadership Cards:

From Deck I - Eliminate Alien Threat: Special Victory Each time you destroy an enemy base, gain 1 conquest point.
Deck II, General Dugalle: Hero Place a Battlecruiser with a hero token underneath it in any friendly area......

Player simply chooses 1 available Terran color (red or blue), and uses all matching components throughout the game. After the player has chosen a color, other players may not choose the unused faction of the matching color.