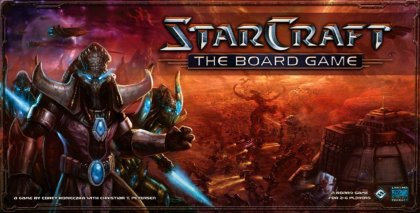 StarCraft: The Board Game

Publisher blurb Including a total of 180 plastic figures and dozens of unit types, Starcraft: The Board Game features an innovative modular board of varying sizes, which guarantees a new experience each and every game. An exciting card driven combat system allows players to modify and upgrade their faction with a wealth of powerful technologies. Players can unleash a Zergling rush, use powerful Protoss shields to halt an enemy invasion, or even send cloaked Ghosts out to guide nuclear missiles to their target. Description In StarCraft: The Board Game, players battle for galactic domination on a dynamic board of interconnected planets. Planetary setup is already part of the game - every player gets two planets to place, and will place their starting base on one of them. Planets are connected with direct and "Z-Axis" connections that are placed during setup, but can sometimes later be modified during the game, and movement is only possible within planets and through those connections (by means of purpose-built transports). Each player controls a faction out of six, that belongs to one race out of three - Humans, Zerg, and Protoss. Each faction has a unique special victory condition, but all factions can also win through victory points that are gained by controlling special areas on some of the planets. Players build units and base upgrades with the resources they gather from the planetary areas that they control, and gain access to additional unit types through those upgrades. Each turn is subdivided into first a planning phase, then an execution phase, and finally a regrouping phase (used for cleanup). In the planning phase, players take turns playing a number of order tokens into stacks on each planet, with orders placed later obstructing the ones that were placed before them. This allows players to set up combos of their own, but also to obstruct plans of other players. In the execution phase then, players take turns again, and when a player's turn comes up he can choose one of his order tokens on top of any stack and execute that one - if all of their orders are obstructed, they skip their action and draw an event card instead. The execution phase isn't over until all players executed all of their orders. Possible orders are Build (used for building both units and buildings), Mobilize (used for moving units and attacking enemies) and Research (see below), and orders can always be Standard Orders or Special Orders, with the special orders having prerequisites but stronger effects. Players can also research new technologies and thus improve their combat deck in a precursor to more recent deck building mechanisms. Each player is given a combat deck unique for their race at the start of the game, and when they research new technologies then matching cards are added to that deck. This allows the players to customize what cards they will draw; when the last card of the deck is drawn, the deck is reshuffled. Most cards remain in the combat deck once researched, though some researched technologies add effects that are always in play, while some particularly strong combat cards are discarded after one use. "Reimplements" StarCraft (video game)

Voti e commenti per StarCraft: The Board Game