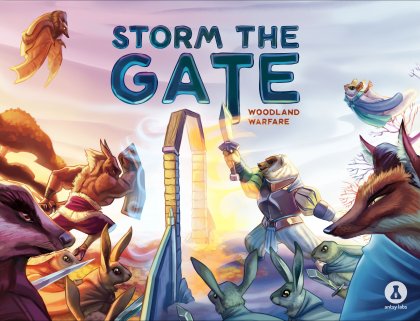 In the times before The Divide, the inhabitants of The Veiled Forest existed harmoniously. The seasons came and went each year, and there was peace among all creatures that made these woodlands their home. One morning, at the very edge of the winter solstice's arrival, all of this changed.&#10;&#10;Storm the Gate: Woodland Warfare, the sequel to Antsy Labs' Storm the Gate, is a frantic tabletop dexterity game in which you must rapidly move your army of heroes into your opponent's battle camp.&#10;&#10;Introducing more depth than its predecessor, Storm the Gate: Woodland Warfare offers players the choice between two factions and six heroes - each hero belonging to a class with its own unique abilities and token dimensions.&#10;&#10;You win the game by clearing all tokens from your camp before your opponent can do the same.&#10;&#10;&mdash;description from the publisher&#10;&#10;