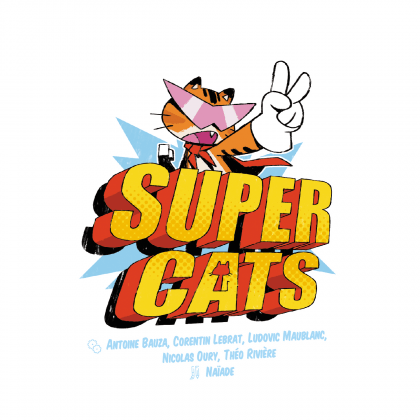 In Super Cats, you play as groups of 5 cats who compete to become the Super Cats Heroes, in order to defeat the RoboDog, devourer of cat food! The first player to transform his 5 cats becomes the Hero and will face the other players who will then collectively play as the RoboDog. &#10;Fights occur in real time, with everyone playing simultaneously, using their hands.&#10;In Episode 1, you chant SU-PER-CAT, hold out your hand and raise 0, 1, 2, 3, 4 or 5 fingers. If you have the biggest unrepeated number, transform one of your cats into a Super Cat! &#10;In Episode 2, the Hero player clashes with the other players. When the Hero's attack succeeds, the RoboDog is damaged. When the RoboDog counters the Hero, his Super Cats become normal cats again. The game ends when either the RoboDog is destroyed or the Hero no longer has Super Cats to fight.&#10;&#10;&mdash;description from designer&#10;&#10;