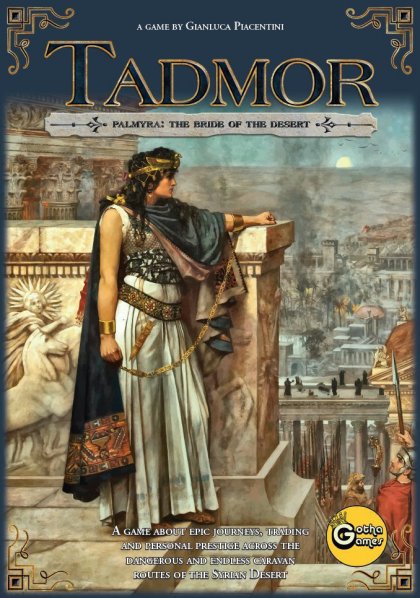 Tadmor is an intense worker placement game about epic journeys, trading and personal prestige across the dangerous and endless caravan routes of the Syrian Desert.&#10;&#10;Players take the role of rich merchants based in Tadmor (also known as Palmyra). They will increase in power and prestige by expanding their trading routes and by contributing to the political and religious life of the city. In the game, a merchant&rsquo;s success is measured in Prestige Points. The winning merchant is the one who scores the most Prestige at the end of the game.&#10;&#10;Each player has a number of Camels and Ships that can be sent to different locations on the board to collect wood, stones, marble or gold and use these resources, in turn, to acquire rare goods, fulfil specific missions presented by the King or build the city temple or the tower.&#10;&#10;Each development line has its own advantages and drawbacks: the Tower provides prestige points during the game and can boost your scoring significantly but it is highly competitive. Also, the more Tower levels you build the higher the building costs. Acquiring Rare goods is key to get more ships which are the main way to collect resources but you must time your purchases very well to get the different sets of goods that can boost your final scoring. King&rsquo;s Missions are very versatile: they are worth a good number of prestige points at game end but also carry a one-off benefit that can result crucial at a certain points in the game. Finally, building the Temple is a slow way of adding prestige points but can give you a dramatic boost when you manage to complete its construction in full.&#10;&#10;Different strategies can be built by acquiring improvements that let you excel on specific areas of the game. The wide range of improvements available and the fact that the mix changes at every game ensures that no play session is the same.&#10;&#10;Growing your trading enterprise and your prestige does not make you immune from danger. Marauders sweep the Syrian Desert plains or sail along the coast to intercept and rob your peaceful merchants. You will have to use all your intuition to spot which region they will attack and avoid placing your Camels and Ships there or these will be lost!&#10;&#10;