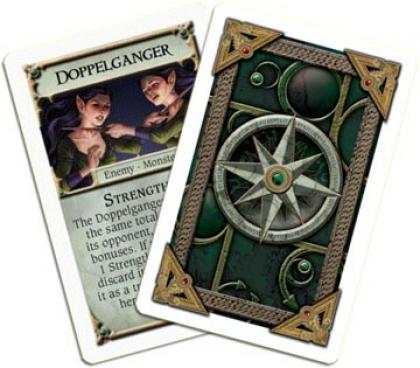 Fantasy Flight Games produced two bonus Adventure Cards which were made available as preorder bonuses when people ordered Talisman (Revised 4th Edition): The Reaper Expansion via the FFG website or from their FLGS.

The Doppelganger Adventure card is an Enemy - Monster originally included in the Talisman Expansion Set for Talisman.

Though the card is unlikely to be reprinted in a future expansion, a similar card was released as a Dungeon card called the Mimic in Talisman (Revised 4th Edition): The Dungeon Expansion.

It was available in various languages from FFG's international partners and given away either with preorders or at launch events.