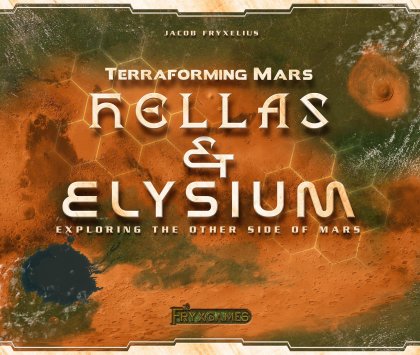 Terraforming Mars: Hellas &amp; Elysium, the first expansion for Terraforming Mars, consists of a double-sided game board presenting two new areas of Mars:&#10;&#10;&bull; Elysium takes players almost to the opposite side of Mars' equator, with vast lowlands for oceans in the north and a dry, mineral-rich south. Place a tile on Olympus Mons, the highest peak in the solar system, to gain three free cards!&#10;&#10;&bull; Hellas, the southern wild, includes Mars' south pole and the enormous seven-hex Hellas crater that just begs to become a giant lake. Building around the pole gives you new placement bonuses in the form of heat and possibly even water.&#10;&#10;Each of these maps consists of new sets of milestones and awards with relevance for that particular map. Place three tiles around the south pole to be a Polar Explorer, for example, or race to have the most estates beside water on Elysium!&#10;&#10;