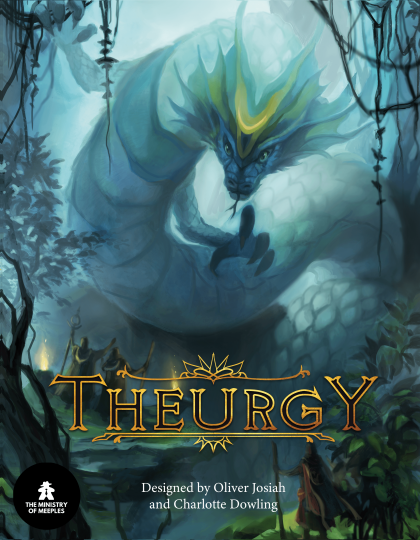 How long has it been since last you cast your gaze upon the world?&#10;&#10;Mortals always were such feeble things, and mortal memories doubly so&hellip;&#10;&#10;Doubts swarm in every place they make their homes, stones that once formed temple-walls now line their hearths, and all your earthly offspring slumber.&#10;&#10;No matter. It should be short work to cast out the doubts, rebuild the temples, and awaken some of your old allies. Only a few faithful acolytes remain, but they will suffice.&#10;&#10;After all, you are not some feeble mortal, and who could defy the will of a God?&#10;&#10;&#10;In Theurgy, you and up to five others take on the role of half-forgotten gods and compete to have temples built in your honour. A player wins if, at their end of their turn, they have met one of three winning conditions:&#10;&#10;Become the Official Faith: Build X temples, including one in the Capital.&#10;Fulfil Your Calling: Build X+1 temples and meet your secret objective.&#10;Spread Across the Land: Build X+2 temples anywhere on the board.&#10;&#10;The exact number of temples you need to build for the winning conditions varies with the player count.&#10;&#10;In many ways, Theurgy is a classic area control strategy game in which you must carve out your territory and undermine the territory belonging to your rivals. However, to achieve this, players must also manage and draft cards wisely. By performing incredible miracles, unleashing epic combinations of monsters, and cleverly utilising their deity&rsquo;s unique power, players can find ingenious ways to give themselves a surprising edge.&#10;&#10;A turn consists of choosing one of the following four actions:&#10;&#10;Pilgrimage: move acolytes and followers from settlement to settlement. Along the way, your acolytes can preach to convert the resident population or fight off monsters to protect your following from the ill will of your rivals.&#10;&#10;Spread the Word: place (or replace) a faith token to mark your growing cultural influence in the surrounding settlements. It will be far easier to construct temples if your religion is already deeply rooted in the region's culture.&#10;&#10;Divine Intervention: perform a miracle by playing a card from your hand or choose a monster to summon from the cards available in the central area. A player may also activate the abilities of monsters they have already summoned, so that the larger a player&rsquo;s horde, the more powerful their interventions become.&#10;&#10;Test the Faith:&nbsp;trigger an anomalous event in a settlement of your choice to see which god the locals turn to when their faith is tested. The distribution of followers in a settlement, each deity&rsquo;s cultural influence, and the level of scepticism present there all play a role in determining which religion's temple will be constructed &ndash; and which torn down&hellip;&#10;&#10;The most successful deities are those best able to time their interventions and use their turns to sneak their influence under the radar and establish followings in the most unlikely of places.&#10;&#10;&mdash;description from the publisher&#10;&#10;