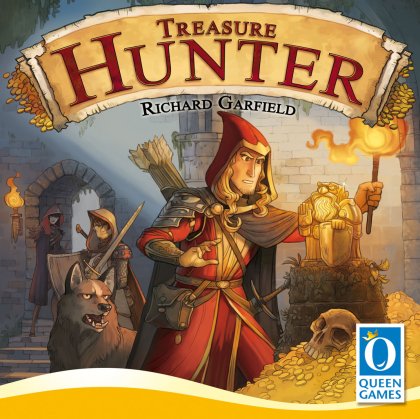 Get as much valuable treasure and coins as you can as everything counts at the end of this five-round game! Watch out for treasure that isn't treasure at all, and draft your team of treasure hunters wisely. Only two treasures are available in each of the three seasons, so get it while you can!&#10;&#10;In Treasure Hunter, treasures are placed on the game board first. Then all players are given a hand of nine cards from which to draft, drawing one card and passing to the left or the right depending on which round is being played. At the end of drafting, all players will have a hand of nine cards and a little knowledge of what the other players may have in their hands as well.&#10;&#10;All players must play any and all cards from their drafted hand of nine for each season they have cards for, whether they want one of the two treasures or not.&#10;&#10;