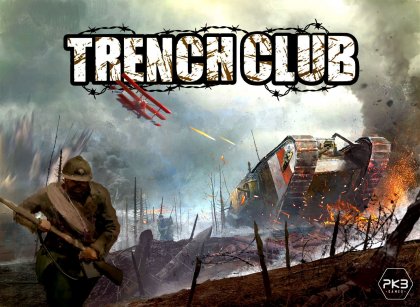 During the First World War, France and Britain wrestle with Germany and Austria-Hungary for the dominance of a decisive front section. Take on the role of a general and send your troops into battle. Barrage enemy units with artillery fire and attack them with your tanks and infantry or surround and annihilate them.&#10;&#10;Trench Club is a complex strategy game in which, in addition to attack strength and armor of the troops, their tactical setup, combat experience, damage and terrain have a decisive influence on the outcome of the battle. Since each unit brings its own strengths, you must cleverly assemble your army to win the victory over your opponents.&#10;&#10;Key Features:&#10;&#10; Exciting strategy game set in World War I&#10; Complex combat system&#10; Nevertheless easy to learn rules&#10; Detailed miniatures&#10; For 2-4 players (age 14+)&#10; 2-4h duration (~1h per player)&#10;&#10;&#10;&#10;&#10;&mdash;description from the designer&#10;&#10;