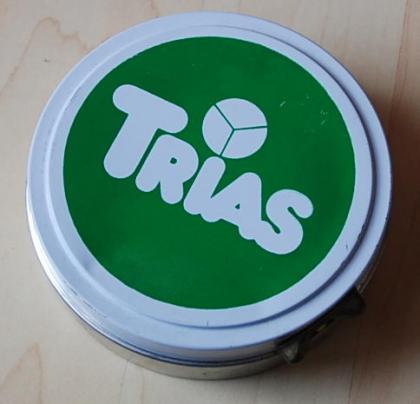 This memory game was designed after a 19th century game idea an is recommended for ages 6 and above. You get 20 circular discs in a tin (like a traditional shoeshine tin, see image gallery); each disc shows a black-and-white picture and is sliced into three sectors. Three very similar game variants are described in the small rule leaflet: Free for all, team play, group play. In all variants, the disc sectors are mixed and placed on the table face down. Now players openly look at some pieces (3 per player in free for all, 2 per partner in team play); if the pieces match, i.e. show a complete picture, the player/team may keep them, otherwise they are turned face-down again and play passes to the next player (in traditional "Memory" fashion). At game end, each complete picture disc scores one point.
The pictures come in 5 groups of 4 discs each: Symbols (zodiacs, wiring schema, sports, signals), Fonts (musical notes, handwriting, typewriter, Japanese), Small Things (buttons, paperclips, matches, tacks), Structures (millimeter grid paper, wood, knitting, honeycomb), Currency (coins, bills, stamps, cheques). A rule "for experienced players" recommends to award extra points if more than one picture of the same group has been collected.