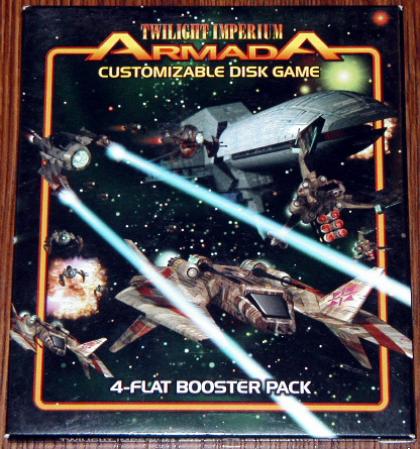 The galaxy is engulfed in terrible conflict. Fleets of havoc are patrolling ancient borders in space and impressive armadas, bent on destruction, are penetrating deep into enemy systems. It is a time of skill and cunning, a time of tactics and planning, it is a time of war.
Armada is set in the rich and popular Twilight Imperium universe where players take control of one of the four major races of the crumbled empire, and must battle for glory and survival. Filled to the brim with ships of war, personnel, and technologies, Armada is a customizable game of strategic resource allocation and tactical space warfare.

Take control of the unique capabilities of each race's fleet:

Each ship is a die-cut counter that you move by "flipping" (Diskwars or Range Wars players will be familiar with this system). Each ship has their stats clearly printed on the tile so there are no sheets to cross reference. Combat is resolved by tossing Hit Counters to see how much damage you do. If the damage penetrates the opponent's shields, they must check for Critical Hits. This is an exciting alternative to dice rolling.

Overall a very fun and simple space combat game, not to mention an inexpensive alternative to miniatures.

Another note of interest, when the Star Trek: Red Alert game went out of print Fantasy Flight Games continued the game in their Twilight Imperium universe. The two games are compatible but the big difference is that Armada doesn't have cloaking technology but does have Squadrons. Squadrons are comprised of Fighters or Bombers and both are extremely nasty. If you play against an opponent with a Carrier, you're a sitting duck unless you include some fighters of your own.