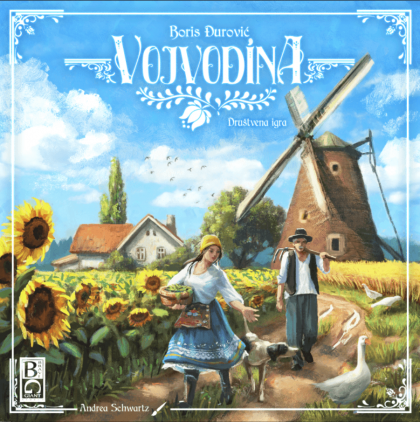 Welcome to the exciting world of Vojvodina!. In this game, you are in the role of a farmer who produces crops and supplies town markets by making lucrative contracts.&#10;Find the right balance between careful and thought-out tile placement and obtaining the best-paying markets.&#10;The goal of the game is to have more money than the other players at the end.&#10;&#10;Prove that you're the best and wealthiest farmer in the most fertile region of Serbia!&#10;&#10;In the board game &quot;Vojvodina&quot;, for players two to four, ages 9 and up, players acquire and place tiles on the map with smart card-drafting.&#10;The game is very fun, because the outcome is always uncertain, and at the same time it is educational because the players can learn a lot about Vojvodina itself as well as the basic principles of the economy.&#10;The board game also promotes Vojvodina as a region of Serbia that is a must-visit if you have not already done so. And if you have, you will surely find some new beautiful place that you missed.&#10;The game is fantastically designed with art inspired by oil paintings of the Vojvodina pain with numerous photographs of Vojvodina's towns from the beginning of the 20th century, which gives the game a unique visual identity thanks to Andrea Schwartz, the game's graphic designer.&#10;The designer of the game, psychologist Boris &#196;&#144;urovi&#196;&#135;, a passionate board game enthusiast, wanted to encourage people to spend more time together in the company of their loved ones, sharing beautiful moments, learning, and having fun, away from mobile and computer screens.&#10;&#10;&mdash;description from the publisher&#10;&#10;.&#10;&#10;Brief description of Gameplay:&#10;&#10;The game lasts a certain number of rounds depending on the number of players. At the start of a round 6 cards are dealt with each player.&#10;&#10;Round is divided into 6 turns:&nbsp;&#10;&nbsp;On each turn, starting with the first player, the players use one card from their hand. The card can be used in two ways:&#10;&#10;1. Discard the card&#10;- The player discards the card face down on top of the deck and draws one of his field tiles from the common pile and places it in front of him.&#10;2. Keep the card&#10;- The player keeps the card face down and places one of his field tiles on the map.&#10;&#10;At the end of a turn, all players pass the rest of the cards from their hand to the player on their left and the new turn begins with a new starting player.&#10;&#10;After all the cards have been played, players receive grain depending on how many fields they covered on the map. Then everyone uncovers the cards they saved and for each town, they managed to supply (value of the grain on the blue bag symbol), they get coins shown on the cards, and for the towns, they didn't supply they lose that number of coins from their treasury.&#10;&#10;At the end of the last round, the player with the most money is the winner.&#10;&#10;