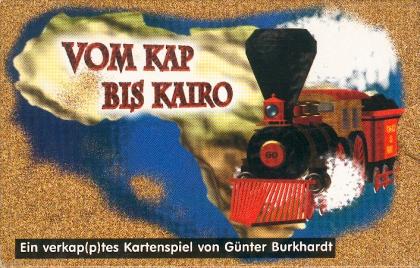 Players attempt to be the first to build a railway route from Cape to Cairo through various terrain types in Africa. Players begin with 100 pounds, which is used to bid on terrain cards and purchase missing tracks necessary to cross terrain. Each turn, a number of terrain cards equal to the number of players in the game are auctioned off and placed before the appropriate player's train, representing the next space to be crossed. Terrain cards show a number of tracks ranging from 0 to 3 and require from 6 to 10 tracks to cross depending on the type of terrain. In turn order, players flip additional terrain cards, and decide whether to build (cross terrain) or pass. When a terrain is crossed, the card is flipped face down and the player who completed the crossing receives back a number of pounds as indicated on the card. The track-building phase continues until one player has no terrain cards lying in front of their train, at which time a new set of terrain cards are auctioned. The first player to complete the crossing over eight terrain segments is the winner.