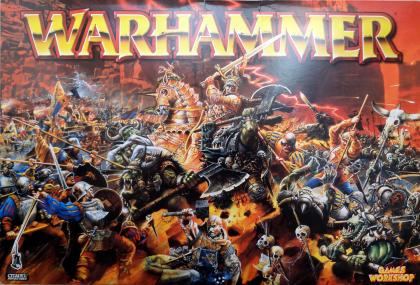 Warhammer is a tabletop wargame of fantasy battles, played by two or more people. You can play small-scale skirmish games involving 20 or 30 models a side, up to massed battles that pit armies of hundreds of models against each other. Rules that govern how the models move and fight are contained in the Warhammer rulebook. Players choose and collect armies of models that are described in separate Warhammer army books. A huge range of models is also available from Citadel Miniatures, in metal and in plastic.

Warhammer is now in its 8th Edition. 8th edition includes some major rule changes/simplifications in order to rebalance the game. This version focuses even more on large infantry units with several additional rules supporting horde armies.

For some, Warhammer constitutes an entire hobby in itself, due to the expansive background, modeling and painting aspects of the game.

From 4th Edition onwards, Warhammer has been available in boxed sets that contain dice, rules, range rulers and templates, along with and enough models for a modest battle. The most recent of these is Warhammer Fantasy Battle: The Island of Blood, this contains 74 plastic miniatures (some of which are multiple figures), along with an A5 sized rulebook.

The previous version Warhammer Fantasy Battle: Battle For Skull Pass which contained over 100 plastic miniatures, along with a condensed rulebook, may still be available.