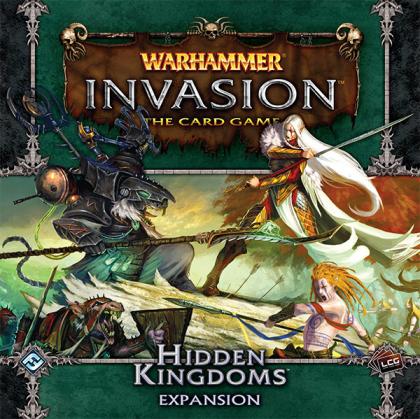 “For thousands of years after the collapse of the polar gates, with the immediate threat of Chaos thwarted, the Lizardmen existed in relative seclusion while the world changed around them.”
–Warhammer: Lizardmen

The world of Warhammer: Invasion The Card Game has changed. Countless wars have scarred its lands. Torrents of blood have soaked its battlefields. No one is safe. No race can sit safely outside its ongoing battles. In the end, there is only war; there is no neutrality.

Hidden Kingdoms is the game's fifth deluxe expansion. Its 172 cards include four capital cards and the maximum legal number of fifty-five different player cards that bring the game’s four biggest neutral races to life as fully developed, playable factions! Players at last gain the opportunity to play as Lizardmen, Wood Elves, Skaven, and Undead. Hidden Kingdoms fleshes out these four new factions with their own capitals and legends, as well as a host of new units and supports, including several that are faction-specific.

Meanwhile, fans of the game’s other races will find additional support for their favorite factions, including new units, tactics, and Tributes, which allow the factions to forge temporary alliances and ignore the loyalty costs for out-of-faction cards.