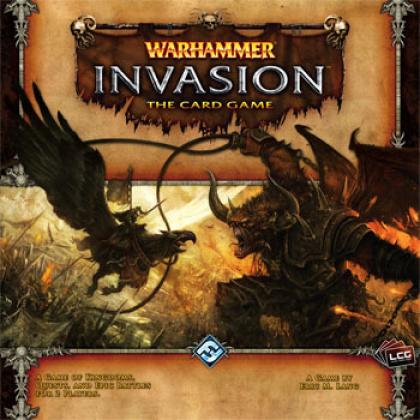 Warhammer: Invasion The Card Game is a two-player card game of intense warfare, clever kingdom management, and epic questing. Players must carefully allocate their resources as they seek to build their kingdom, complete quests, and attack the enemy’s capital.

Set in the rich and diverse Warhammer universe, player's can choose different factions that each have their own style. Will you play the indestructible grudge-bearing Dwarfs, the shrewd and manoeuvrable Empire, the savage and destructive Orcs, or the entropic and mutating forces of Chaos. Or will you cleverly craft an alliance, playing the combined might of the forces of either Order or Destruction?

Warhammer: Invasion follows a similar model to that of Magic: The Gathering. Players will construct a deck of cards to their liking that they will use to battle against each other by drawing cards and using resources to play them. Cards can consist of monsters or heroes, one-off spells or abilities, and permanent structures, devices, or equipment. However, there are many differences which make W:I very different from Magic. Two of the main differences are in the release model and the ordering of the gameplay area.

Rather than a blind collecting model, W:I follows Fantasy Flight Games' LCG model. Each expansion or chapter pack is released with the full contents known to the purchaser. Rarity is not a factor.

Rather than playing your cards into the same area and relying on card draws for resources or extra cards, each player has a 3-zoneCapitol that they must protect and those sides are generally where cards are played. If an opponent causes enough damage to a section of your capitol it is "burned." If two sides of your capitol are burned you lose. Depending on which side of your capitol you put a card into it will be able to different things. Units and buildings in the Kingdom Zone contribute to your available resource pool while ones in your Quest Zone cotribute to your card draws. Cards played into the Battlefield are used to attack opponents. Also, units in a zone being attacked by an opponent can be used to defend that zone from damage. This adds a large amount of tactical decisions when it comes to playing your cards. You must carefully balance building your economy with the ability to attack and defend.