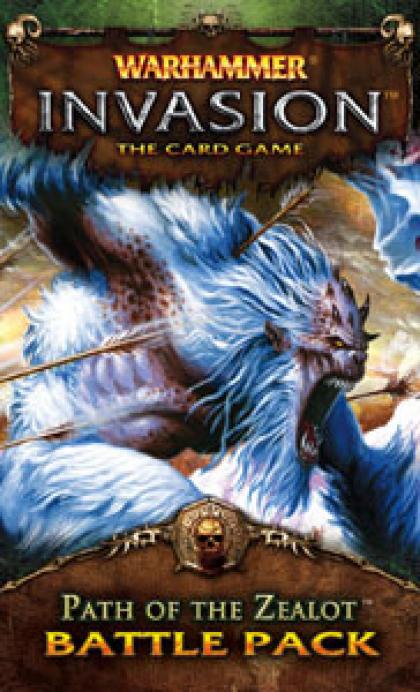 Warhammer: Invasion – Path of the Zealot

The first battle pack,The Skavenblight Threat, saw the emergence of the diseased and squabbling Skaven. Now their forces are bolstered. The newest battle pack, Path of the Zealot, sees their chittering horde grow. Poison Wind Globadiers rain death upon the heads of their opponents, as they can corrupt to deal damage. The Chittering Horde tactic brings more Skaven into your fold, as it allows you to search a portion of your deck for ratmen recruits.

Not to be outdone, the forces of Order gain the assistance of the Zealot Hunter, who destroys that which doesn’t belong upon entering play. He brings with him the capricious Veteran Sellswords, who change sides with each passing moment.

The starmetal known as Gromril has been a part of Dwarf lore for as long as the mountains have sheltered them. Now it emerges onto the battlefield, to shield the sons of Grungi. The Gate of Sigmar bars the entrance into one of the most populated cities in the Empire, and the staring skulls carved into the doors greet any invader as they crash against its might. Each turn, it shall do the same for you and keep damage from reaching your noble home.

Every zone sees new additions, and players will be forced to re-evaluate their plans. Will you devote the newest Empire hero, Gustav the Bear, to protecting your newly built Kingdom, or will he assist you in further developing your Quest zone? Dwarf Miners are an excellent unit to bring in later in the game. Their ability to “fix” the part of your capital they enter can be a game saver, especially in the often targeted Quest zone. The deadly Bloodsworn make an excellent protector for damaged zones, as each opposing figure that falls restores their health.

Speaking of the Quest Zone, a new Quest appears for the foul followers of Chaos, as they can now show themselves to be the Wolves of the North. Rumor has it that Valkia has personally found this quest to be most rewarding...

The Path of the Zealot also increases the number of High Elves and Dark Elves, as the war spills over into their lengthy lives. The Repeater Bolt Thrower launches a wave of indirect damage at your foe, and gets stronger the more developed you are. Vaul’s Unmaking removes the weapons from the hands of the enemy and leaves them with nothing. Dark Elves call upon dark powers and pul the very blood from their foes. Call the Blood can remove a damaged unit from play, a nasty surprise for the foes of Malekith. Dark Riders, wielding wicked swords, charge down upon those foolish enough to be in their way.

This fall shall see some of the fiercest battles and desperate races to develop mighty empires. Legends will be forged. Will you be one of them?