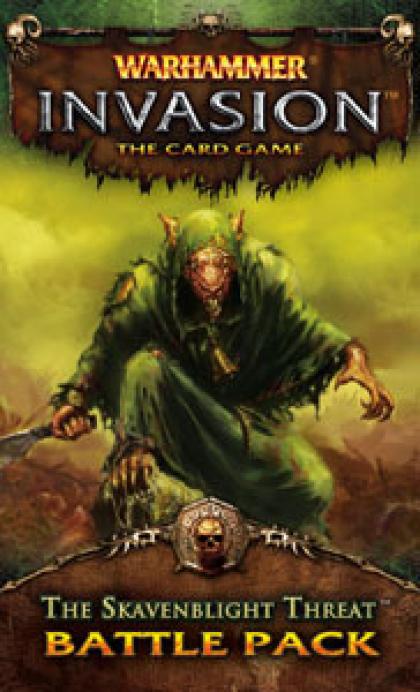 The Warhammer LCG is getting a dose of warpstone. Sneaking onto the scene are the vile forces of the Skaven! These ratlike parodies of men are some of the most vicious fighters the Warhammer world has ever seen. The Skaven would easily take over the world, if they could stop fighting themselves long enough to do it.

Each race gets new cards, and each side sees new allies.

The forces of Order gain some powerful new tactics, such as Infiltrate for the Empire and Stand Your Ground for the Dwarfs. Tyriel, a new hero for the High Elves, forces an opponent to reconsider his attack if he has limited units to send.

Destruction’s mighty followers gain the might of Malus Darkblade, of the Dark Elves. A master of the blade, this Dark Elf Hero will lay waste to any unit too cowardly to face him on the fields of battle. Tzeentch exerts his influence by granting Chaos the use of Bolt of Change! This spell turns a development into a unit, giving Chaos some extra firepower, or setting up a foe to have his development killed on the fields of battle.

In addition the forces of Destruction gain the duplicitous help of the Skaven. This first pack features the services of Greyseer Thanquol, Clan Rats, and the awe-inspiring majesty of the Warp Lightning Cannon!

The forces of Order see their ranks swell with the presence of Witch Hunters. The first to appear is Marius the Righteous. This heroic character is able to deal a devastating blow to any corrupted unit.

The Skavenblight Threat is the first pack in the Corruption Cycle, a set of six linked packs highlighting the forces of the Skaven, Witch Hunters, and the seductive arts of magic.