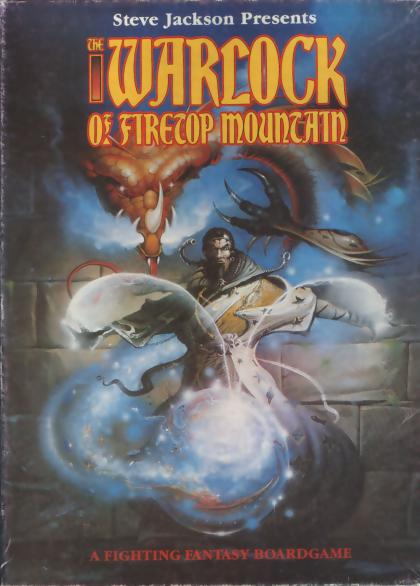 The Warlock of Firetop Mountain

This game is based on the "Fighting Fantasy" game book of the same name. This series of books is similar to the "pick your path" type of adventure books that TSR and many others published around this time (mid 1980's). Fighting Fantasy was somewhat different in that you created a character and rolled for combat and other effects instead of automatically succeeding in whatever path you chose (like a Tunnels and Trolls solo dungeon).

Anyway, the game is very similar to Dungeon from TSR. Characters roam the labyrinth fighting creatures and gaining treasures to increase their power. Characters have three stats: Skill, Stamina, and Luck and these affect both combat and various perils that are held in the dungeon such as traps. The object of the game is to travel to the end of the dungeon and open the Warlock's treasure chest. Along the way players must deduce the correct combination of three keys which will open the chest, and find or steal the appropriate keys. This is done through a mechanic exactly like Parker Brother's Clue game: you ask players if they have any key cards of a particular number and secretly note down what their answers are. The first player to open the Warlock's treasure chest wins the game.

Voti e commenti per The Warlock of Firetop Mountain