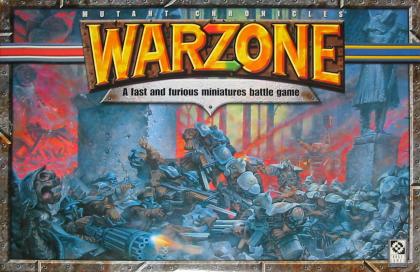 Warzone (second edition) was an effort to even out some of the excesses from Warzone 1st edition but keep the squad-based flexible feel of Warzone (as compared to, say, Warhammer 40k).

It used the standard setup, army lists, actions for units, and stats like most of the Sci-Fi wargames of the time. The real departures were a one-shot, one-armor save mechanics (unlike roll to hit, wound, armor save, save as in 40k) and flexible movement that had the two players alternate between armies rather than move all of one army at a time.

This edition was distinguished by particularly purple prose in the world view section, excellent art accumulated from the Mutant Chronicles universe so far, and a generic feel to the squads and characters.