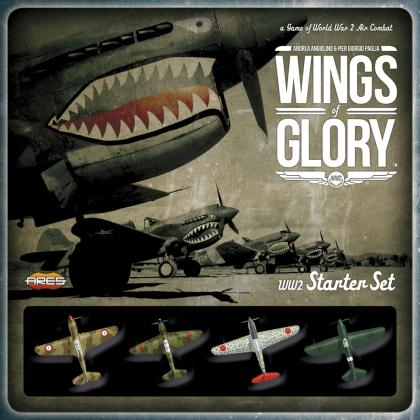 Wings of Glory: WW2 Starter Set is a tactical air combat game set in WW2 that uses cards and miniatures.

This first set is a complete game that features four airplanes for the WW2 game series: the American P40, the Russian Yak-1, the Japanese Ki-61 and the Italian Re-2001 Falco. Other components include maneuver decks for each airplane and a rule book that includes Basic, Standard and Advanced Rules, Optional Rules, and Scenarios. A full assortment of counters, tokens, rulers, and airplane console boards complete the set, which can be expanded with additional WW2 Airplane Packs to allow for larger battles with different airplanes.

Wings of War: Fire from the Sky