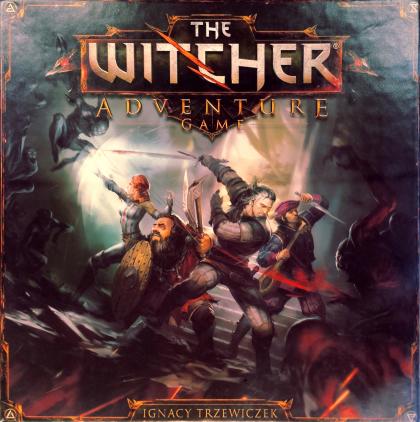 The Witcher Adventure Game takes players on a journey across the world of The Witcher, a detailed world, rich in lore and characters, fleshed out by Andrzej Sapkowski's famous series of novels, and honed by The Witcher video game trilogy.

Players assume the roles of four distinct characters from this series: Geralt of Rivia, monster slayer; Triss Merigold, cunning sorceress; Yarpen Zigrin, dwarven warrior; and Dandelion, roguish bard. Each character has unique skills and multiple ways of overcoming obstacles, but you decide what to do during the game: Do you fight your way to victory, call on your charm, or try your hand at diplomacy? You can bring enemies around to your point of view with a sword as Geralt - or bribe them with gold and threaten to call on powerful friends as Dandelion. If a situation calls for strength in numbers, Yarpen has his own fellowship of dwarves to command, and Triss can rely on her expert skill with magic to save the day.

Each character has its own deck of Development Cards, so each time you play you can discover something new by trying out varied characters and experimenting with different builds. For example, when playing as Geralt of Rivia, the main hero of the Witcher franchise, you can develop your character either by specializing in brewing and utilizing combat Elixirs, or else by growing your ability to cast powerful Witcher Signs.

A variety of quests invite players to hunt monsters, earn gold and interact with the characters they meet in a web of alliances and treachery. Decide whether you’ll help the other players or look after your own interests first, and keep an eye on the progress of your friends while you carefully work your way towards victory.