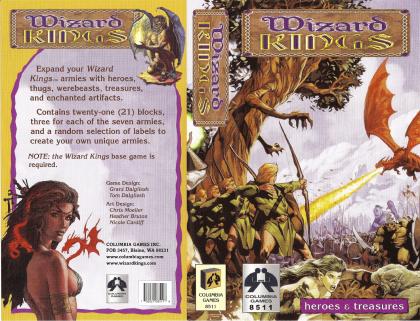 These additional armies provide new units to add diversity and flexibility to your Wizard Kings games.

In the first edition of Wizard Kings, each army expansion included a complete set of blocks for a particular army. The Mercenary armies (Chaos and Werebeast) were exceptions, containing several blocks from each of the seven basic armies so that mercenary units could be distributed as desired.

In the second edition of Wizard Kings, expansion units are sold in a random booster format that includes three new blocks for each of seven armies. (Note that the Ferkin army has been replaced with the new Feudal army in the second edition.). In 2012 the initial Heroes & Treasures expansion sets were supplemented by Ancient Kings with an assortment of seven historical armies.