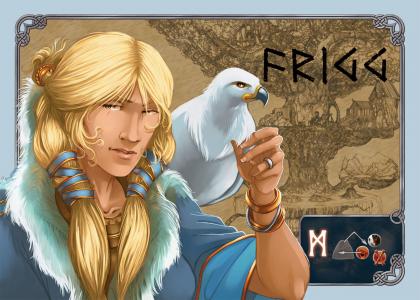 In Yggdrasil the players represent Gods of Scandinavian Mythology (Odin, Thor, Tyr, Frey, Freya and Heimdall) who fight against monsters (Loki, Fenrir, Surt, Hel, Niddhog and Jormungand) to avoid the Ragnarök (the end of the times).

The Frigg promo gives players one additional god to choose from besides the six included in the base game, adding another option for more varied play from game to game.

Frigg's power is as follows: When looking for the Vikings' souls in Midgard, if any Fire Giants were drawn, place one of them on the Kingdom of Fire.