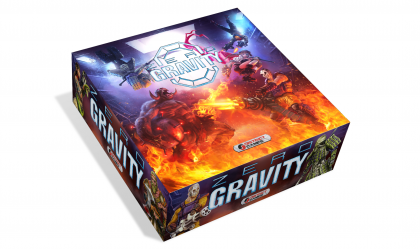 Zero Gravity is a capture-the-flag game for 2-4 players, featuring an innovative 3D arena, 80+ magnetic miniatures and a fresh and unique game play.&#10;&#10;Overview:&#10;Each player controls a team of 14 miniatures that aims at scoring the target amount of Cheers and win the Grand Final of the XXV Zero Gravity tournament.&#10;&#10;Background:&#10;We are in 2130 and the most disruptive technology of the third millennium is finally out: the hyper-local gravity engines, capable of governing the gravity force and tackling overpopulation by enabling vertical cultivations and holding skyscrapers upside-down. &#10;This technology was invented by Newton Corporation, which quickly became the most powerful corporation in the world. &#10;On top of substantial improvements for human life, the entertainment industry was disrupted too, with the creation of the Zero Gravity Tournament - a spectacular and cruel annual event organised by Newton Corporation to amuse and entertain the crowds!&#10;How does it work? Elite warriors fight each other to obtain Cheers (points) from the crowd, in capture-the-flag matches held inside a cubic arena with hyper-local gravity engines allowing for any kind of movement.&#10;&#10;Quick Rules:&#10;You win a game of Zero Gravity by collecting Cheers (points) from the crowd, earned with spectacular actions and by massacring every opponent in the arena. Before you start the game, agree on the amount of Cheers needed to win: 15 Cheers for a quick game, 30 Cheers for a standard length, 50 Cheers for an epic match.&#10; &#10;A match lasts a variable number of Turns until a Team scores the amount of Cheers required to win. Each Turn is divided into 4 Phases to be played in the listed order:&#10;- Restock Phase &#10;- Troopers' Phase &#10;- Heroes' Phase&#10;- Scenario Phase&#10;&#10;1. RESTOCK PHASE&#10;Each player draws a Sponsor Card from the deck (there is no limit to how many may be kept in hand) and then gets some Energy from the supply: &#10;2 (fixed amount)&#10;&#10;+ 1 per Spawning Point (of his colour), excluding the first one placed during setup&#10;&#10;+1 per Crate eliminated during the previous turn&#10;&#10;2. TROOPERS' PHASE&#10;Each player, following turn order: &#10;- places a new Trooper on each of his empty Spawning Points;&#10;- activates each of his Troopers in play (once), one after the other, in the order he prefers. &#10;Troopers are not very tough (the teams use them as cannon fodder); they only have a single Energy token. It is not necessary to spend Energy to put them into play, nor to put them on the section of the Team Sheet dedicated to them.&#10;&#10;3. HEROES' PHASE&#10;Each player, following turn order, performs one of these actions: &#10;- Activate a Spawning Point &#10;- Activate a Hero &#10;- Play a Sponsor Card &#10;- Pass &#10;After the last player, the first player chooses again and so on, until all players have chosen to Pass.&#10;&#10;4. SCENARIO PHASE&#10;The player with the least amount of Cheers (if it is a tie, roll the dice to choose just one player) must: &#10;- generate Beasts and Crates, just like during the setup (see the rule sheet);&#10;- if he generated at least one Beast this way, he may activate all the same types of Beasts in play only once, one after the other, in the order he prefers. &#10;- Activate a Beast - When activated, a Beast can do one of the following:&#10;&quot;Move and Attack&quot; (just like a Unit);&#10;&quot;Run&quot; (just like a Unit);&#10;&quot;Move and Special Skill&quot; (after moving, as described in the Movement section of the rule sheet, the Beast uses its Special Skill)&#10;&#10;